Member P posted a question:
Since we are on this issue of raising children, i would like to ask for views on whether children (especially little boys) can play with toy guns?
My stand has been strictly "NO".

Member L's reply:
Guns can be used by police or thief.
If my son wants to play police,then is ok.

I think the trend now for older kids is computer games PS3,XBOX...like 'grand theft auto,conan...'
we need to keep watch.They will take the character of a robber or warrior, to steal, kill n destroy.

Member K's reply:
I struggled with that question before and decided that it is ok for my children to play with guns ( but not to murder…).

The reason is this:
The bible never told us not to kill. It simply tells us not to murder (pre-meditated killing).
Some Christians soldiers in the USA faced problems when called to serve in a war claiming
that it is against the bible because going to war entails killing (their enemies).

Member P's further question:
Concern is whether at a young age, can he discern btw killing and murder?
I also attribute the increasing violence amongst youths in the west these days to the nature of games and toys. Of course, dysfunctional families play a big role as well.
While I take the stand that I will put off letting him play guns for as long as I can, the overall approach I would take is to be in touch with whatever they do or express interest in, providing guidance along the way.

I taught children for about 3 years before going army and another 2 years after army. I got the opportunity to watch some of them grow (4 years old to 11 years old). During those time, I design programs for children. I go on to teach student at secondary level for a year or two where I taught teenagers with learning issues. In the last five years, mainly teach students at tertiary level only. I am always thinking about how rules are best applied and especially in how it really can have a "learnt" effect on student.

Let alone the learning curves of a child at different ages, I am interested in thinking about how the adult got to cope with changes (mental and intellect) of the growing child. And am thinking if refraining a child from doing things is a method that is:

1. applicable most of the time
2. to various age age groups
3. really going to make him/her grow to become a better person

I know of a friend who was the only child and since young was very protected by her parent. This child grow up in the watchful eye of their parent as much so that she did not really got the chance to make friends and socialize. Well, by the time she enter work force, she realize that she could not cope with dealing with people and with work politics amongst other things. After suffering from severe depression and job changes, she committed suicide.. Her old parent lived to tell us the story at her wake... I really think this is an isolated case, but an reminder of "extreme parenting" I suppose.

I am thinking "to what extend do we refrain a child from been exposed to things of the world?"
and if it is a method that really help a child grow. Think of it in another way:

" where on earth does the child learn how to use a toy gun?"

a. Possibly from watching tv programs with parents?!!
b. Or from schoolmates?
c. children programs?

I am just thinking if playing and disallowing the play of toy gun is the root of the problem (violence? insane killing in the school of Americans?). Or is it T.V. programs, friends and many times from adults themselves? So do we refrain the child from not just toy gun but many more...
Member C's reply:
My (2 cents worth) view is that prolong deprivation of a desire/interest/curiosity without proper guidance/explanation may lead to bigger problem in future?

Of course we can’t expect them to understand at their tender age but total deprivation may not be the way to go.

I have no toy gun at home nor will I allow it if my girl asked as I think there are “better” toys out there. Tiffany came home one day, curl up her hand into a shape of the gun and say “bang” shoot me in my face when I decline one of her “nonsense” request. I think she learn this from her “boyfriend” in school, I am bias here, could be a girlfriend too. So, I think the best way is if they encountered it, let them “experience” it while we as parents moderate it. In due time, they may say that we are “chiong hei – long winded” but we know is for their good.

My reaction when she did the “bang” to me, look at Mavies with disbelief, shocked and start telling Tiffany don’t do that blar bla bla while she just calmly walk away ignoring my rant. (probably also blowing away the smoke from her hand gun).

May be I should just play dead to humour her form this point onwards. Then crab her when she come closer and tell her that it is not a good gesture to “shoot” your daddy when she disagrees with me. Just a thought, you may disagree but don’t “shoot” me. :-}

What is the similarity among Gun, Sword, Fire, Bomb, Money, Tongue, Pen, Blog ?
They are all powerful - able to create great impact for good or bad.
They are amoral powerful agent.
Physical person can be killed by the sword or gun or even a useful tool like a hammer or screw driver or a beautiful vase.
Characters are assassinated by the tongue or the pen.
Some country government is after the authors of certain blogs.
The responsibility of parents is to bring up their children with the right values and the ability to make the right decision.
The ability to make the right decisions are gained through giving the opportunities to make them and to experience the consequences - whether successes or failures or mistakes.
Parents have the responsibilities to prevent major failures - like death, great physical or mental harm.
But parents have to let the children handle the consequences for those with lesser impact.
The level of impact increases with age.
The number of decision making opportunities increase with age.
Teach the value, Show the uses, for good and harm, of the 'things'.
Let them decide.... for age > 2.
For Age <2>2 may be can teach and let them decide.
For Age >2 , children starts challenging authority.
Be sure to implement the warning and consequences.
Many Parents out of 'love' did not implement what they said they will do if violation occurs --- resulting in out of control children later.
Here is mind map .... 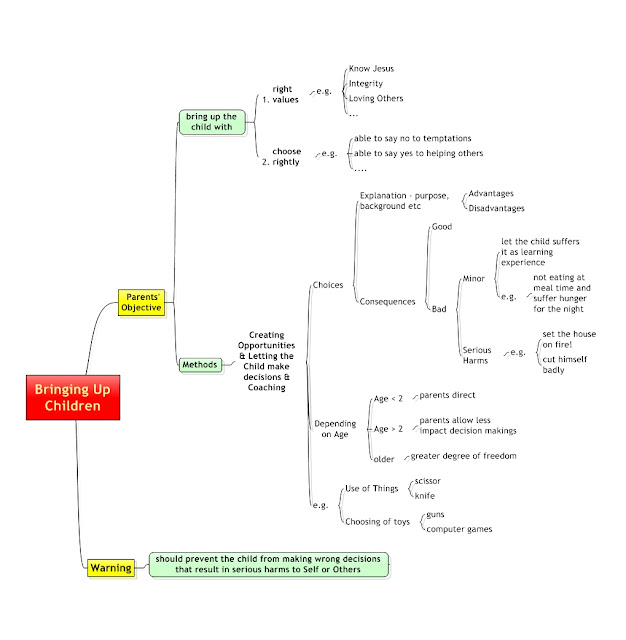 After reading the replies, this is what I gather from general observation:

Proverbs 22: 6 "Train a child in the way he should go, and when he is old he will not turn from it."

People tend to focus on what is right and wrong and the emphasis is on right behaviour, which can be missing the mark at times.

Instead, focus on teaching the child how to navigate/respond in this imperfect, fallen world using biblical principles.

This is just trying to sum up & simplify everything in a nutshell. Not exhaustive but I think can be used as a guiding principle instead of trying to be too specific in methodology.

Grace n Laws
If i ve 3 sons.First one I give him all grace,second :all laws,third :part grace part laws.
What will the outcome be?
Who will love the father more?
Who will be successful in career?
Who will be successfull both in career n relationship?
All grace may love the father more n become EQ stable.
All laws may be successful in studies n career, have I.Q but no E.Q.
Grace n laws may result in both success in career n relationship... both I.Q n E.Q.
Love n Laws
In a good functional family,
we must use love to rule our children n
we must use rules to love our children.
Use love to rule may include compassion,empathy,involvement n rewards
Use rules to love may include setting boundaries,times management,chores management,
anger management,punishment n whateverment..
Passion n Laws
In a good functional football game we need both.
Game without passion will end zero goal n draw.
Game without rules will end in fights.
Spirit n Laws
In a functional church we need both.
SPIRT:Now the Lord is the Spirit; and where the Spirit of the Lord is, there is liberty(2 COR 3.17)
LAWS:And you shall know the truth, and the truth shall make you free.”(John 8.32)
For you, brethren, have been called to liberty; only do not use liberty as an opportunity for the flesh, but through love serve one another.(GAL5.13)
But he who looks into the perfect law of liberty and continues in it, and is not a forgetful hearer but a doer of the work, this one will be blessed in what he does.(james 1.25)
In Petra
We ve elder to preach the WORD,lines upon lines n precepts upon precepts.
Who is also strong to set the boundaries,duties n rules.(LOGOS)
We ve pastor to preach the WORD with passion n worship flowing in the Spirit.(RHEMA)
Strong in mission n fieldworks.
SPEAK PLAINLY:
I used to sleep on my right side,after a while it ache.
If i use right mind to put across my ideas,leftist n logical mind (truth) will complain.
Then i sleep on the left side,after sometimes this side also ache.
If i use my left mind to to put across my ideas,rightist n emotional mind (spirit)may complain.
No choice, i sleep face up.Middle of the night ,i got a kick.
My wife complain that i snore.
If i use part left n part right,sometimes both love me,sometimes both hate me.
Love the difference!
Children are different,petrans are different even leaders are also different.
We must love the difference through love serve one another n become doer of the work.
We ve not reach yet,but we must enjoy the journey.
Love all, serve all
larry
Posted by Lim Liat at 8:10 PM No comments: