A quick overview of the history and future of the mankind is given in Daniel's vision of the Four Beasts of Chapter 7 ending in the eternal Kingdom of Christ and His people. We are given a view of God's throne, the angelic hosts, the saved saints and judgments. It describes the rise of the Little Horn (Anti-Christ), his rebellious actions and words and his defeat by Christ who came to establish His kingdom forever and ever. We are then to prepare for Christ's 2nd coming - to be ready anytime. to be prepared for a long time and be busy in investing in things of eternal values in the mean time.

The Overview of The History and Future of Mankind.
This is the first of many visions of the future given to Daniel. This one came early at the 1st year of Belshazzar king of Babylon. In the vision, there was the rise of four beasts representing four kingdoms over the history of mankind. The final one was a little horn that uprooted three kingdoms and went against God. He even prevailed against God's people for 3.5 years (derived from a time, times, and half a time). Eventually, he was destroyed by the Son of Man (Jesus Christ) who would establish His kingdom on earth forever and ever.

Daniel also saw the thrones, and the throne of God and saw the judgments with books being opened. This vision of the throne was given in between the rise of the little horn and its destruction.

It shows us that there are the spiritual world influencing the physical world. The 'Beasts' of the kingdoms could also be spiritual beings with the one represented by the little horn being killed and burnt by fire first (v 11) and the others dethroned and kept alive for a season (v12).

There are many other lessons that we could learn from this lesson. This are summarized in the Questions and Answers mind-map shown below: 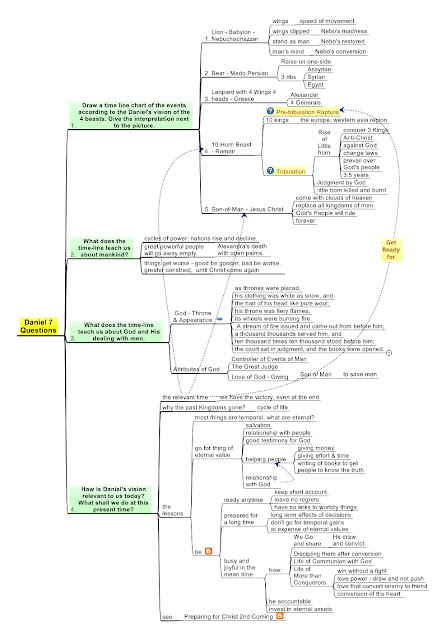 Please also note that the world of the four beasts referred is the western world of roughly the same territories of the Roman Empire. At those times, there were great kingdoms of the east such as China that were not spoken of. So the anti-Christ does not exert any power in the East.

As we read further, more and more details will be given in other visions of Daniel.

The key points are: