2nd Validation Gal 2:1-10
I am not sure the reference starting point of the 'after 14 years' - was it from Paul's conversion or after the 3 year in Arabia. Nevertheless, it was a long time. Because of the proximity of verses, we tend to read Bible events as if they happen instantly or quickly. We need to remind ourselves that events may take place over a long time. The waiting period for God to answer us may be over years rather than days. Pual had been preaching the gospels for 14 years. He did not see the need for the 2nd validation until God told him.

Paul pointed out a few things about the authenticity of his gospels:

The Open Correction 2:11-14
Paul openly corrected Peter's hypocrisy. There is no issue with pointing out the error. But there are issues raised about the manner of correction.  Perhaps Paul should do it with more love and do it in private. See A Good Teacher, Paul & Peter. Did Paul do the right thing here? Who else are being corrected as well? If we are committed to friend we will defend him. Truth that is distorted just a little bit will not be the truth. Hence Paul took much effort in defending, not yielding to error, that resulted in him suffering much persecutions. At present, in the name of peace and unity (it is more uniformity than true unity) we are pressured or asked to conform and compromise. That is not the way of Paul. True unity is actually unity of differences in harmonious interactions. We can respect others viewpoints but we cannot compromise our own viewpoints.

Justification by Faith & Not By Work of  the Law 2:15-19
We are justified by believing in Jesus Christ and not by work of the law ( repeated 3 times in v16!). Then the typcial question arises - If it is not by work, then how can we stop people from sinning? May be we should ask the other way round. Has knowing the laws stop people from sinning? The answer is obvous - we know the laws and yet we still break it. Knowing the laws has not much impact in stopping us from breaking it. Paul said it well in v19, we just have to give up the idea of following the laws will make us ok. There should be another way, the way of God's empowerment. We die to the idea of trying to live by laws but instead to live by the grace of God. Paul gives the secret of victorious living in v20.

This is the key verse of the book. It should be broken down and studied. Here is mind map. 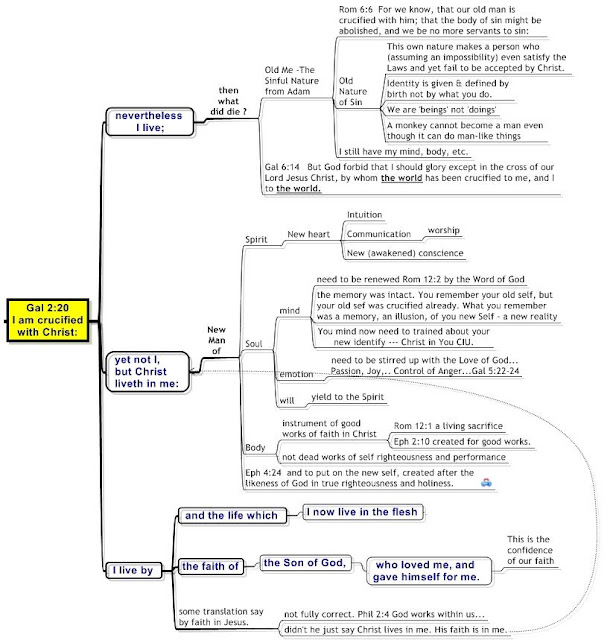