Does All Paths lead to the Same God? Learning from Michael Ramsden

All paths lead to God may seems a humble and inclusive idea. But such incidence as truth makes one as  the know all God. On closer examination, all religions on the surface appear to be same, 'make people good', but in details, they exclude the ideas of one another. If one digs deeper into the content of Christianity, one will find that Christ died for all. He teaches us to forgive and love our enemy. He reached out to the outcast and sinners. Christianity is very inclusive. Most religions are about man having the right thinking, experience/feeling and doing to gain salvation. Christianity is unique in that the Gospel is not about making bad man good but about making dead man alive, through Jesus Christ was crucified and resurrected. Once we receive Jesus Christ to get a rebirth into a New Life in Christ. Reducing Christianity into a set ideas or feelings or behavior lifestyles as the criteria for salvation is distortion of the Gospel. But right behavior should come after one is saved by the grace and Holy Spirit of God.

The group discuss on the sermon by Michael Ramsden on "ONE GOD MANY PATHS" which can be found at the following url's: 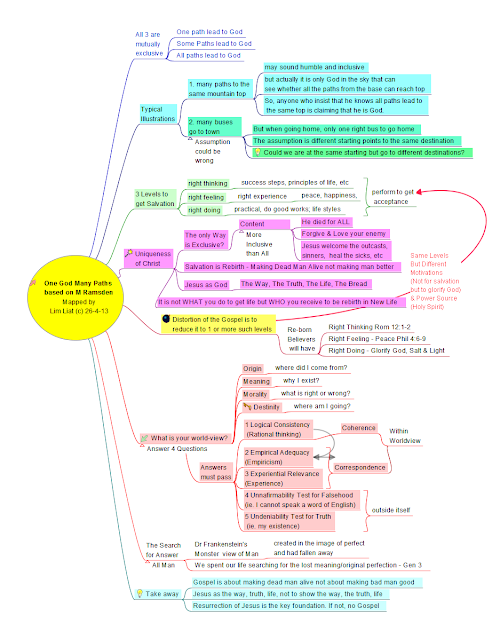 Questions for Reflections and Some Partial Answers 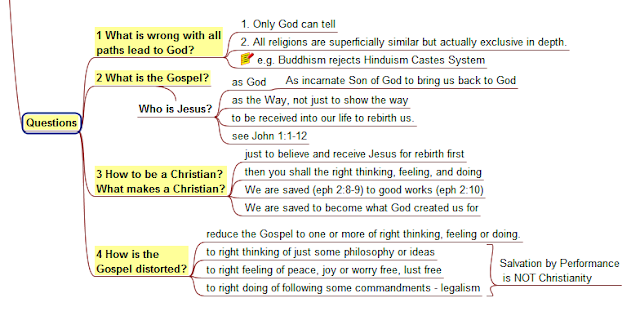