The sequence of events recorded by John, the first hand witness, contained more details than the others, and is shown as the mind map below: 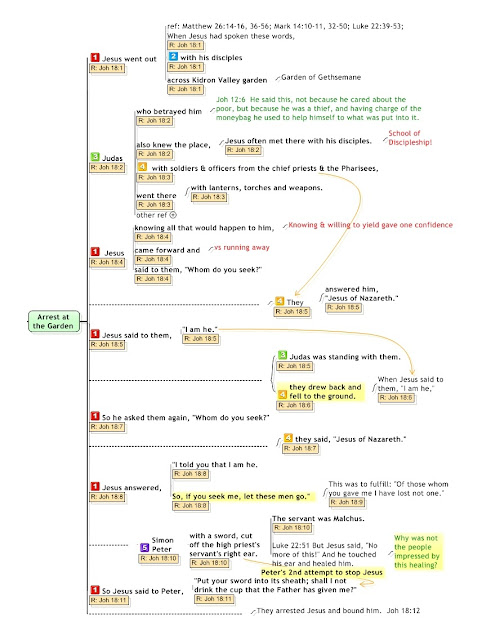 Q1  There are 3 persons and 2 groups of people, can you identify them?
Q2 Who and what did each person or group do? Can you imaging what were they thinking?

P1 Jesus
Jesus, Son of God, knew His mission well and having decided to take up the bitter cup, was bold and loving. His bold approached the soldiers and told them that it was He that they wanted and to let the others go. His boldness, some said his anointed power, fell the soldiers. A demonstration of His power and authority that He withhold. He rebuked Peter's violent action and healed the injured Malchus whose ear was cut off by Peter. His mission to die for men is not be stopped by His personal suffering. Love and righteousness may sometimes cause us to suffer. Will we be willing to suffer for love and righteousness?

P2 Disciples
Despite many the warnings given by Jesus, as revealed by the related passages, they did not seems to know the urgency of the time. They slept when Jesus asked them to keep watch. At this end times approaches, as evidence by the frequency and serious of earthquakes, wars within and between nations and sectors of people, increased of knowledge, global traveling to and fro, will we be sleeping as well?


P3 Judas
The betrayal of Judas did not just happen. It occurred long before as recorded in John 12:6 that he was a thief. Now that he discovered that Jesus was not going to set up any kingdom but to die, he decided he better take care of himself and cash out by betraying Jesus for 30 pieces of silver before it was too late. Evil people are smarter at exploiting the situation than the people of light (Parable of the Unjust Stewards). This need not be so.

P4 Soldiers
They were just acting under instructions of the Chief Priests and the Pharisees. They never knew their job could be so shockingly easy. They met no resistance. They needed not search or given chase. They were wondering who this Jesus was. Why were they not impressed by the miracle healing of Malchus's ear? May be some of them later found Jesus as He said He was.

P5 Peter
He slept instead of praying. He was still acting on impulse of the flesh. This time even cutting off the High Priest's servant ear. He was going to stop Jesus for going to the cross again. It was natural for Peter to protect his master. His boldness changed to denial of Jesus 3 times later.
Posted by Lim Liat at 6:30 PM